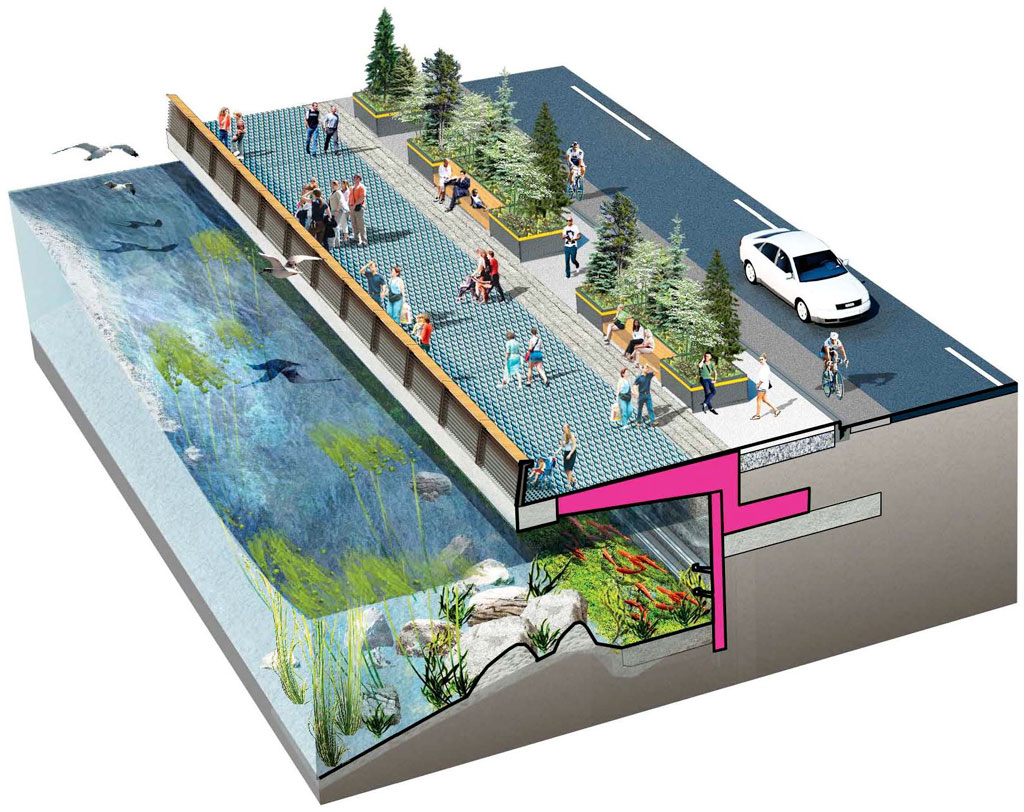 The Elliott Bay Seawall Project involves replacing the old seawall on Seattle’s waterfront to protect buildings, roads and utilities while providing shelter for marine life. The project will construct approximately 7,112 lineal feet of seawall along the Puget Sound shoreline. Fish habitat enhancement features greatly in the design, and the project will relocate the seawall ten to fifteen feet landward of the existing structure, restoring approximately 1.8 acres of seabed. It will include intertidal benches to provide shallow water for juvenile salmonids where shallows don’t currently exist. The new seawall face is constructed with texture, patterns and shelves formed in concrete to encourage aquatic vegetation to attach and small organisms to establish, which provide forage for juvenile salmonids and other marine fish. The new cantilevered sidewalk also includes a light-penetrating surface to allow more sunshine to reach the water, aquatic vegetation, and organisms below that juvenile salmon depend on during their outmigration. The overall project provides a significant ecological lift in the nearshore.

The new seawall meets current seismic standards and will last more than 75 years. While the primary concern of the seawall project is public safety and habitat improvements, we anticipate that it will contribute to future economic benefits as part of the overall effort to redevelop Seattle’s downtown waterfront.

The Elliott Bay Seawall Project is funded primarily through a voter-approved bond measure and other local (City of Seattle) funds, with a $32 million contribution from the King County Flood Control District. While there is no federal funding supporting the project, the Seattle Department of Transportation (SDOT) partnered very closely with the U.S. Army Corps of Engineers, U.S. Fish and Wildlife Service, and National Marine Fisheries Service through the environmental review and permitting process for the project. This partnership has continued over the past several years during construction.