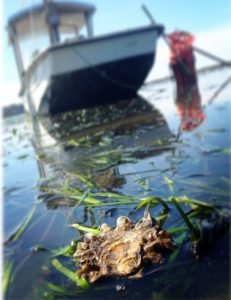 For decades, Drayton Harbor provided ideal growing conditions for shellfish and jobs for many in the local community. By 1995, much of Drayton Harbor was classified as prohibited for shellfish harvesting because fecal bacteria from livestock, on-site sewage systems, boats and marinas, and the local sanitary sewer system were contaminating the shellfish beds.

The downgrade of shellfish beds prompted a community-wide effort to reduce pollution and clean up the harbor. To address human waste, septic systems were repaired, sewer pipes were fixed, and a new sewage treatment plant was built. Pump-out facilities were relocated to reduce the risk of accidental spills from boats. To address waste from agriculture, the Whatcom Conservation District helped farmers voluntarily improve their manure-handling practices and stop application of liquid manure during shellfish harvesting season.

This community-led effort paid off in November, 2016: after 25 years of hard work and dedication, 810 acres of shellfish beds in Drayton Harbor were reclassified as â€œapprovedâ€ for shellfish harvest. Year-round harvests resumed for the first time in 22 years.